my hire planner... 'my thing'
Nothing in your hire planner yet... browse now
All Categories > DVDs, Books, Music > Books > Computer books 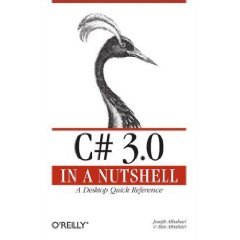 This is a concise yet thorough reference to C# 3.0 programming as implemented in Microsoft's Visual Studio 2008. C# 3.0 in a Nutshell gets right to the point, covering the essentials of language syntax and usage as well as the parts of the .NET base class libraries you need to build working applications. But unlike earlier editions, this book is now organized entirely around concepts and use cases, providing greater depth and readability. C# 3.0 introduces the most significant enhancements yet to the programming language, and C# 3.0 in a Nutshell delves deep into the subject while assuming minimal prior knowledge of C#-making it accessible to anyone with a reasonable background in programming. In addition to the language, the book covers the .NET CLR and the core Framework assemblies, along with the unified querying syntax called Language Integrated Query (LINQ), which bridges the traditional divide between programs and their data sources. Free of clutter and long introductions, this book provides a map of C# 3.0 knowledge in a succinct and unified style: Opening chapters concentrate purely on C#, starting with the basics of syntax, types and variables, and finishing with advanced topics such as unsafe code and preprocessor directives Later chapters cover the core .NET 3.5 Framework, including such topics as LINQ, XML, collections, I/O and networking, memory management, reflection, attributes, security, threading, application domains and native interoperability Designed as a handbook for daily use, C# 3.0 in a Nutshell is an ideal companion to any of the vast array of books that focus on an applied technology such as WPF, ASP.NET, or WCF. The areas of the language and .NET Frameworkthat such books omit, this one covers in detail.

* this item has been listed as available free of charge